I’m one of those people who give nicknames to vehicles.

I had an old 1983 sedan that we named Christine because of all manner of strangeness with the engine.

My motorcycle is named “The Wee Star“.

The Pathfinder, because it actually pulled all of the things that I’ve asked it to: “The Little Pathfinder That Could”. Though it’s short name is Twuck.

Daisy asked yesterday if we should name the new truck.

“What should we name it?”

I thought for a moment, “UPGRAYEDD!” 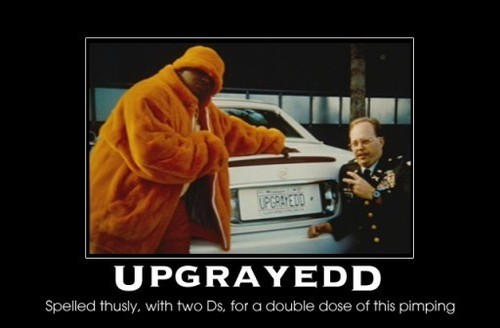 “Spelled thusly. With two D’s, for a double-dose of his pimping.”

For those that don’t quite grok the reference, please see the movie, Idiocracy.