Other than the daily drop off of our daughter at school and the busyness of our son it is my job to go through ALL our possessions. Attempt to identify the items we can not live without. List and sell what I can on Craigslist and Ebay. Gather smaller ticket items for a huge garage sale for later in April and donating other items either to the school or second hands stores. Hopefully without making it impossible to live in our small yet very adequately sized home. Right now I feel like everywhere I turn at home we are tripping over piles of things I’m putting in the way. I’m sure it certainly makes John bonkers!

With this talk of downsizing I keep thinking of the dream life I hoped to have when I was younger. Something I’d somewhat felt prevented from with my choice of occupation as a hairdresser yet it was an occupation I was strongly drawn to and was talented at. To make a decent living you have to build a following, be reliable and totally consistent, stationary. I’d even considered being a hairdresser on a cruise ship.

I’ve always longed for adventure, travel, a bit of hippiedom and experiences through working. A season or a year in each place working and learning, stretching my “Jill of many Trades”. I did manange a cross country move from Washington state to South Dakota where I held onto my cosmetology. Had some fun living in a small town where there happend to be a college and was near the annual Sturgis Harley Ralley.

Then a few years later down to Colorado… Relationships and responsibilities kinda got in the way. I was young and felt I still had time ahead of me to accomplish the things I desired.

I felt so compelled by my responsible side. Do what was expected. I ended up in a temping position at a telecom company. The job became a permanet position making a stable paycheck. It is also where I met the great guy I married… and the awesome stepson I’d help raise.

I pursued what has always been fed to me as what I should want. Things. House. Cars. Toys. Family. Don’t get me wrong, some of those things I wanted desprately, others turned out to be empty and false happiness. I still needed the creativity outlet that cosmetology gave me but state licensing here at the time was difficult to work through so instead I plugged away at a desk job that often sucked the life out of me. It took more than 6 years but I did get out of the cubicle and behind a styling chair again.

The last 8 years have been a growing and learning experience. Home ownership turned being owned by our house. Establishing myself as a mother to two more Littles, home maker, urban vegetable gardener, quilter, knitter, home improver.

Now that the teenager is out of the house and on to his own adventure, it is up to John and I to stop living up to others ideals and expectation of what our lives should be like. We are both chomping at the bit to be free of all the excess weight of the things, house, cars, and toys that don’t make us happy. We are ready to focus on family and the life experiences we can have together.

I can’t wait to show our 5 year olds the learning adventure that life really is supposed to be! For now I’ll settle for packing for our weekend camping trip to a local State Park that was flooded out last fall and listing a few more items on Craigslist. 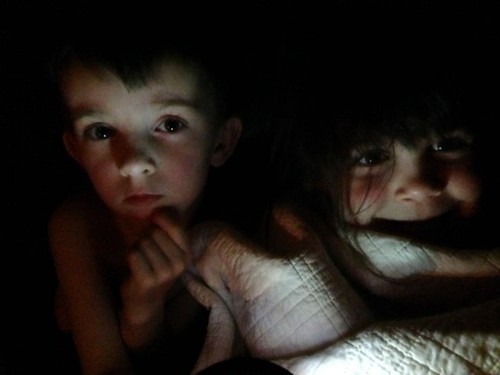