With a day-job that takes up most of the days, blogging on this particular blog becomes a lower priority. But, eventually, I get round to posting things. It’s not that we don’t think about unlocating pretty much constantly — we do, actually. It’s just that the busyness business — that is, all of the many loose ends and projects that need tending to so we can unlocate — have our full attentions.

I should make it a point to try posting things here more regularly. Maybe even just a quick RV-related thought for a day.

On that note, I can report that we did attend an RV sale this past weekend: the 11th Annual Colorado RV Super Sale over at Mile High Stadium(‘s parking lot). It’s not an RV show with product and service vendors, but instead only trailers, fivers, and motorhomes out of the left-over stock and a few used units from a couple of the larger vendors near Denver.

We did see a C-class bunkhouse (Jayco 32BH) that we thought was rather nice as such things go, but I don’t think we’re quite to the point where a C-class would be suitable for us for full-timing. Maybe in a few more years: 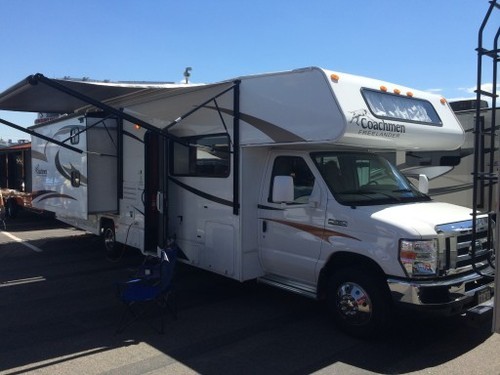 Price wasn’t posted, but a look around the interwebz shows about $100K.

We did rather like some of the toy hauler fivers — I’d have my motorcycle readily available — but would prefer they had some interior bunk options rather than just the “garage will sleep six” kind of things. We’d like both kids to be inside the conditioned living space and I don’t want them to have to creep gingerly around the Wee Star every time they crawl into bed.

Also at the show was a model line that, while I’d seen online, I’d largely disregarded because of the word “luxury” in its marketing material: 2014 Reflection 323BHS.

But, we did a walkthrough and though about the options. It’s only a single ¾ bath, but with a full-sized shower instead of the corner shower stall. I don’t like the theater seating combo couch thing and would prefer to have an actual dining table for the family to join round. However, it’s only $44K, and now that I look at the numbers on their site, it’s actually lighter than I’d expected, coming in a full ton under UPGRAYEDD’s 5th wheel GVWR. She’d pull it.

For slightly less ($35K), another fiver we’d seen at another show, the Forest River Heritage Glen QBQ. Two bathrooms. With kids, that’s a plus.

But, this time round, we’re not looking at Fivers or motorhomes. Our priorities place us, for now, in the realm of the largest Travel Trailers.

Still looking. Although, while there, we saw the Forest River 380BH5, which was rather nice for a $30K porta-house.

Also at the show, we’d overheard two common questions from salesmen to potential buyers looking to get into one for the first time:

They don’t care what you’re towing with. If you’re looking at a 9,000lb TT and have a Kia Soul, they’ll say anything to convince you that your little car will pull whatever trailer you’ve set your sights on. They’re in business to move product — that’s it.

To the second question, this is a financial trap. The reasons are complex, but in the simplest terms, it’s a psychological tool used to trick people into thinking they’re getting a good deal: distract you from the total price of the object and focus on a much smaller portion of the whole. See above: they’re in business to move product — that’s it.