Every time this woman does something, I see the face and actions of Dolores Umbridge. And vice versa.

Just saw this come across the wire — well, across the coax that provides internet service. Their title reads: Breaking: New Jersey has Stopped Approving the Transfer of Any Guns in NJ.

The official story coming out of NICS is that the “system is down” and NICS employees said they had “no idea” how long it would be until the system was back up and running again.  When pressed by a sales associate at a local NJ gun shop, the NICS operator told him that he doubted it would be up and running until “after the new year”.

I’m assuming that the quotes around “system is down” and “no idea” were intended to be sarcasm quotes.

I’ve said before that I’m no conspiracy nut, though I do tend to think far more critically these days.

However, I am a Systems Engineer (Unix, Linux, Windows, OSX; data centers, networks, interoperability; etc.) and I can tell you with absolute certainty that computer systems do go down. In many organizations, there is often only a laborious manual failover procedure if anything goes wrong, sometimes no backup plan whatsoever, and disaster recovery for some IT organizations is so nebulous that its first instruction is “Update your resumé.”

At work, we’ve been running on less than a skeleton crew for the past two weeks as most engineers are burning off their use-it-or-lose-it vacation before the end of the year. Traditionally, very little actually gets accomplished during the last two weeks of the year because of that. So, making the statement “after the new year” does seem to me very reasonable because it’s likely when the only person who knows what’s broke will be back in the office to fix it.

My own direct experience tells me that it could be nothing.

But that same experience also tells me that it could be a spark.

“Among the many misdeeds of British rule in India, history will look upon the Act depriving a whole nation of arms as the blackest.” – Mohandas Gandhi, an Autobiography, page 446.

True. It’s in his book and we can observe clearly that doing so in any recorded instance has led to a less safe environment for the citizenry.

I also hear tell that simply putting that quote on one’s Facebook wall is sufficient to have an account terminated. I’ll test that theory shortly.

Well, it’s the start of some new ink. It’s odd that he said a toast I gave at a dinner last year was the inspiration for it:

I do recall I was, uh, already a few sheets in meself when I stood and rendered that to my motley crew.

This made me proud. 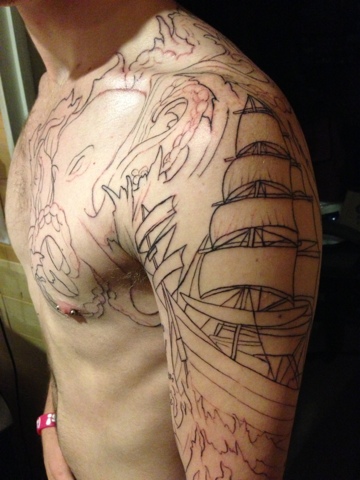